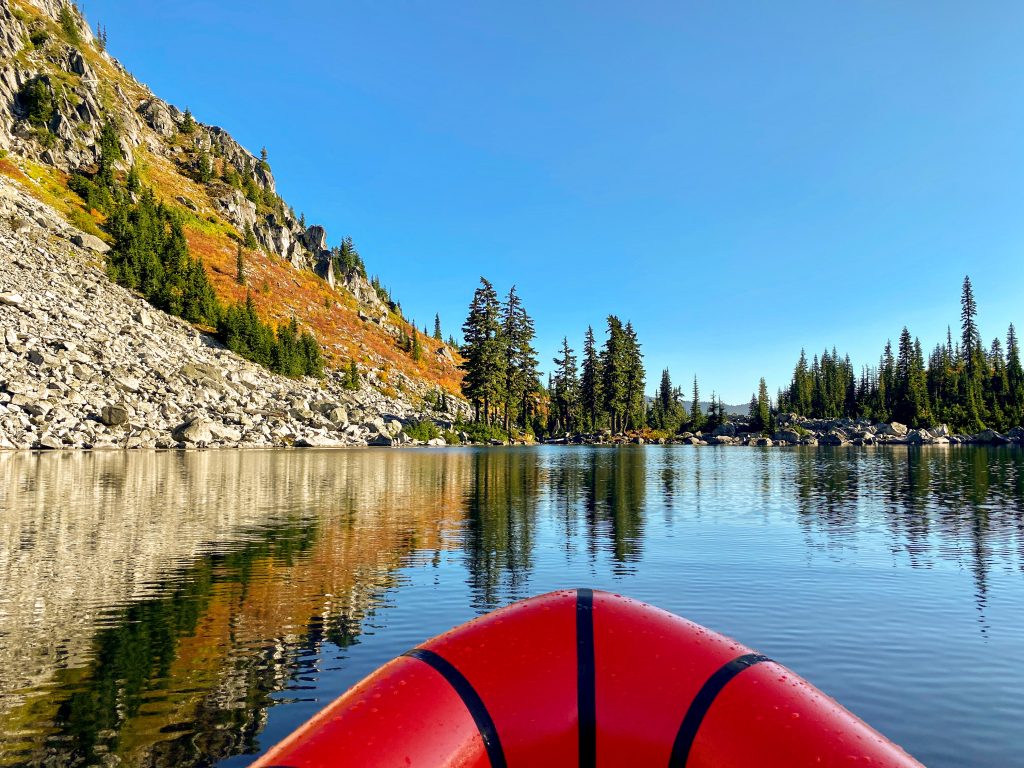 At the end of July, Jon turned 30, and I gave him a fancy raft to take backpacking. I promise he really wanted it—we had a birthday trip slated for him, but closed borders meant we deferred that adventure, so alas… a fancy raft! Part of what made it a great gift was that I had pretty much no interest in ever using it.

Well, the raft came in a few weeks ago, right around the same time wildfire smoke rolled in, so Jon didn’t get to take the raft out until last weekend. We set off on Friday for a Fall hike. My requirement was foliage, Jon’s was a lake. I packed my book, and we wound up actually going with friends, so I also had good company for when Jon cruised around in his boat. When he returned, he offered it to the group. (One at a time—this is not a watercraft for multiples.) I love being near the water, less so being in or on it, so I had brushed off the offer in favor of my book, pup, and camp chair. One of our friends set “sail,” and Jon said again that I should really give it a try.

Eventually, I did. I didn’t plan on going out very far, or staying out very long, but once I started to paddle, it wasn’t so bad. The water was super still and the sun was out. Once I was about halfway across, my natural inclination was to turn around and head back.

I realized I was nervous to go all the way across the (small) lake.

I also realized—a moment later— I don’t want to be a person whose choices are made by her fears. Anxiety doesn’t get to drive. So I kept paddling. It was truly not an impressive feat. Really can’t stress this enough: the lake was small, I know how to swim, I could’ve reached an edge at any point and walked back if I really needed to. But the moment when I realized why I was going to turn around, and chose differently? That’s the feat. I realized I was going to let anxiety make my choice for me, then decided instead to choose who I wanted to be—who I am. That is the victory; I get to choose.

Sometimes it’s easy — not turning a raft around—and sometimes it’s really hard — persevering when it feels like everyone or everything is against you, but you know you’re on the right path. It is always worth it. There is always a feeling of fullness, of coming home.

A feeling of really seeing yourself—a sense of ease in your soul—of “Oh, there you are. I’ve been looking for you.”

The Guest List by Lucy Foley
I wanted a suspenseful novel for Fall and that’s what I got! It may have been my tired mind from a few stressful weeks, but this book actually kept me guessing until the end and was super easy and nice to read.

Music in the Morning
This is usually part of my routine, but I let it go for a while and only recently brought it back. If you don’t usually turn music on as you pour your coffee (or tea or water) in the morning, give it a try. Even when I don’t think I’m in the mood, it’s such a nice mood-lifter and atmosphere-shifter.

Emily in Paris on Netflix
Truly an inexplicable joy–it’s a little cringe-y, but it’s also adorable and I want more of it.