I had been thinking about China since my Godfather/Uncle, Aunt, and their boys moved there six years ago. Since Jon learned about our awesome family living there, it’s been on his list as well. It took us plenty long, but we finally made it! My Mom joined us for this trip as well.

We arrived in Beijing and my Aunt Kerry was kind enough to meet us at the airport. We traveled to Kerry’s home and waited for Jack and Dominic to arrive back from their activities of the day. One of the many benefits to having family as locals is that we were able to just relax and enjoy some great food right there at home. We missed Luc who was on a school trip, and Kenny, but we knew that we would get to see them soon, too. We crashed out pretty early, ready to rise, shine, and take on the city the next morning.

Since this trip was relatively quick and we packed so much into our nine days in the country, we booked the entire time through ExoTravel (formerly known as Exotissimo). They did an incredible job and I’d highly recommend the company and most of our individual guides. We lucked out with incredible people in each city. In Beijing, we had the pleasure of being toured around by Selina! We were fortunate to not have to join a larger group, so our days were complete with our group of three and our guide.

We enjoyed breakfast and coffee at “home.” There was still some of the infamous Beijing smog, but we lucked out in that it had cleared up quite a bit since we had flown in the evening before. We got the full experience, wearing masks to avoid breathing some of the pollution as we walked with the boys to their bus for school, but got to ditch the surgical gear before heading out to see the sights!

We were ready for a full day of the standard Beijing tourism sights; Selina picked us up and we went to Temple of Heaven, lunch, Tiananmen Square, the Forbidden City, and the Imperial Gardens. 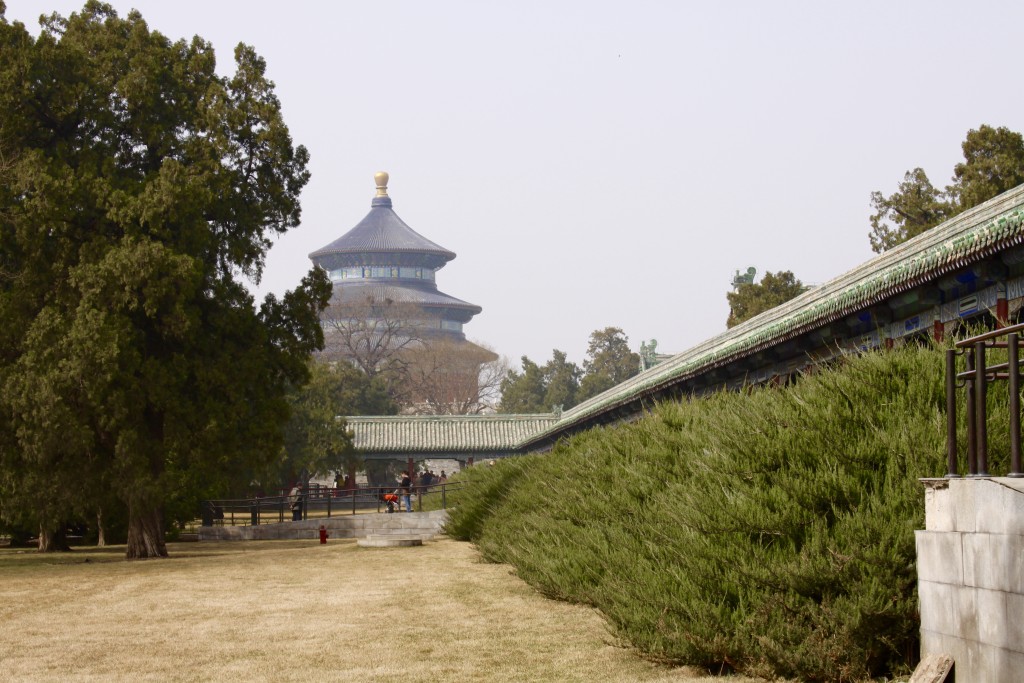 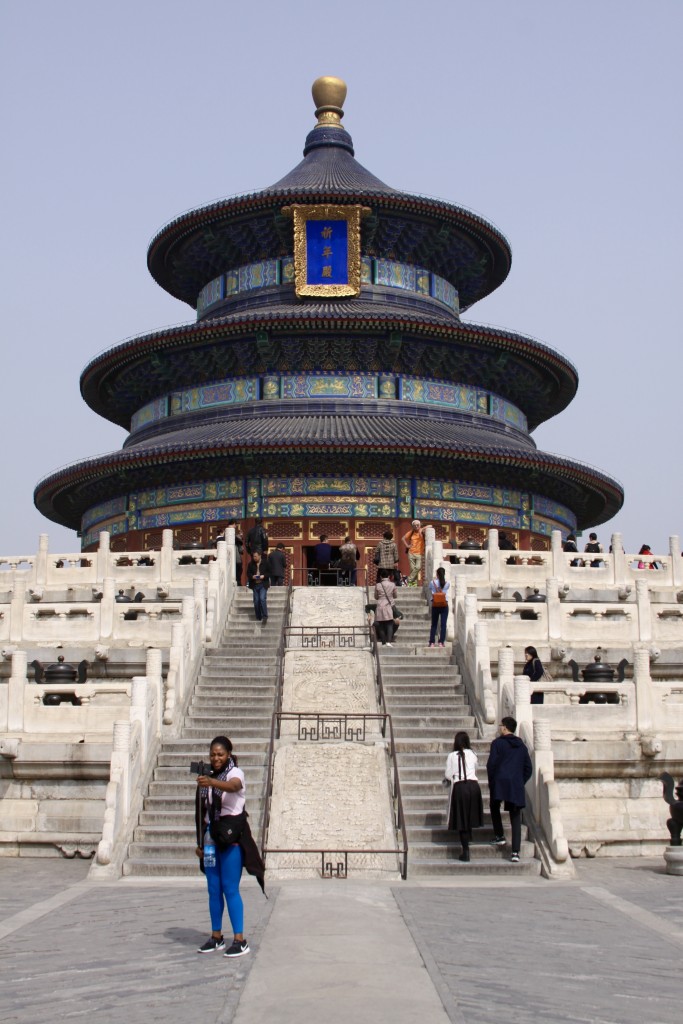 Temple of Heaven, Featuring: Tourist with Selfie Stick, 1 of 1 million 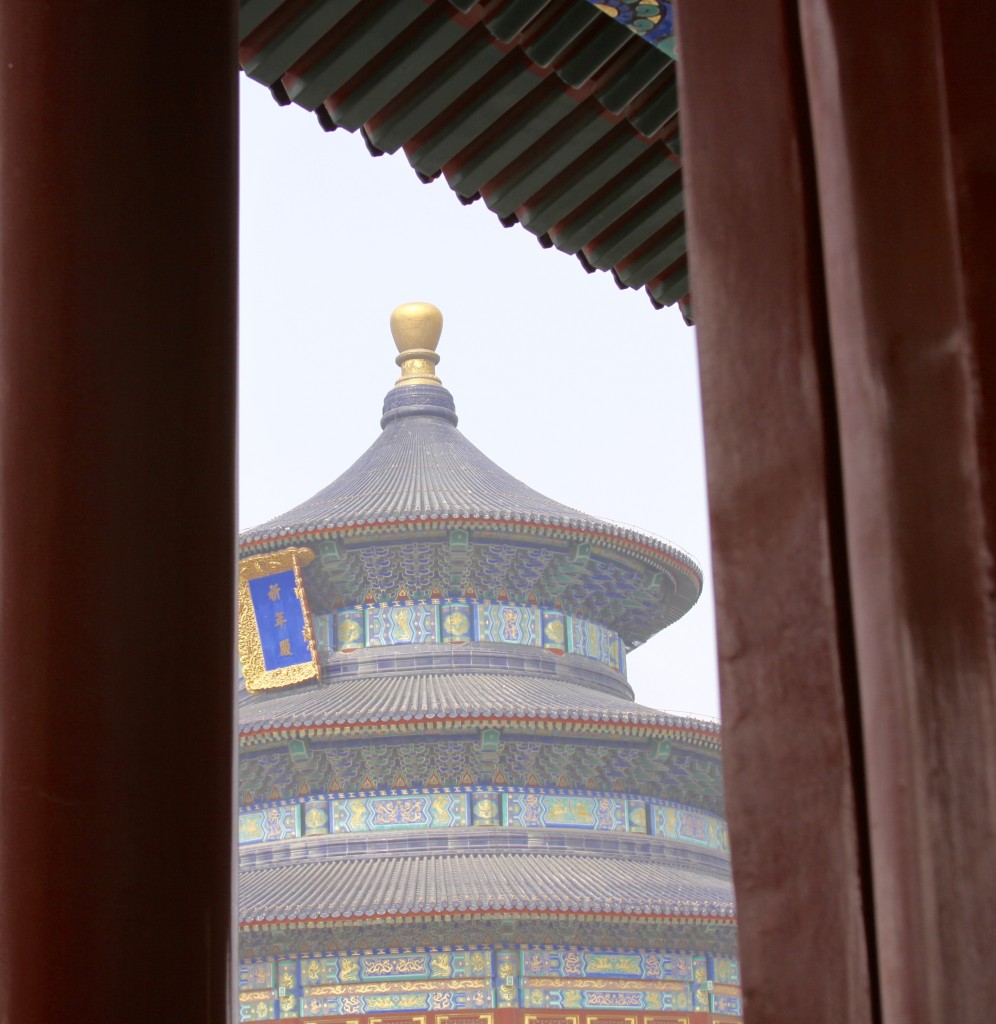 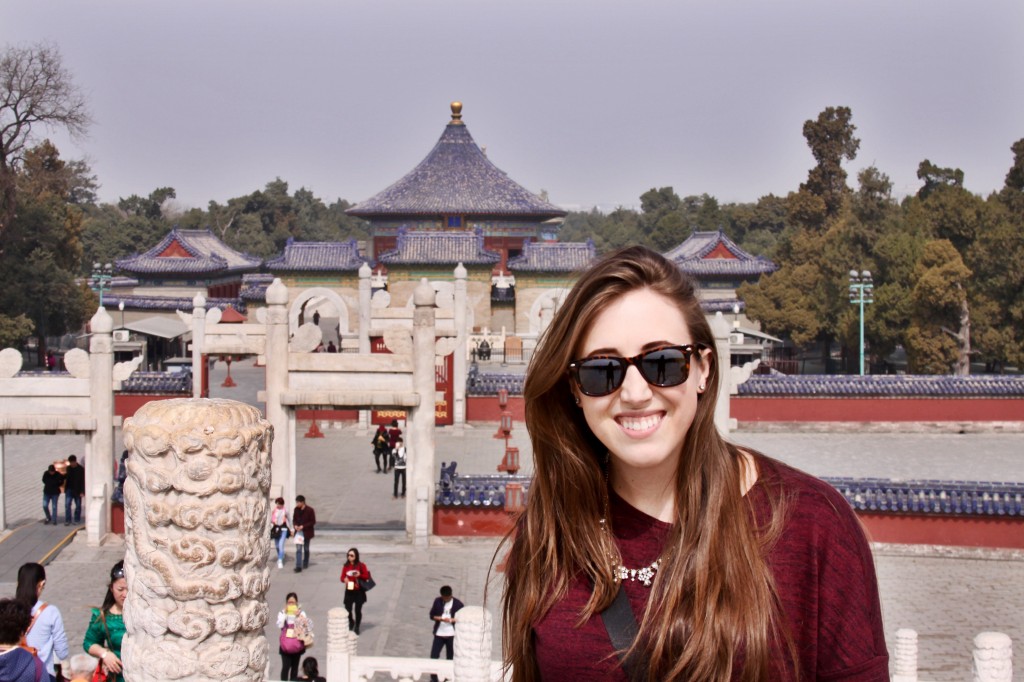 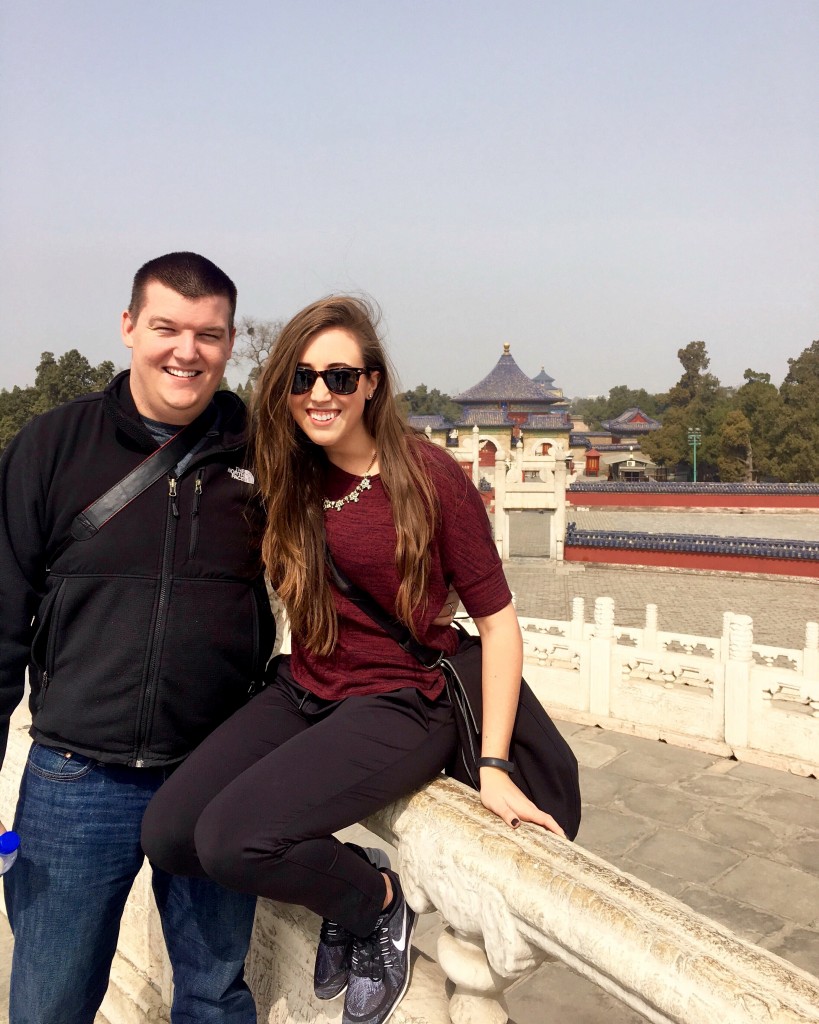 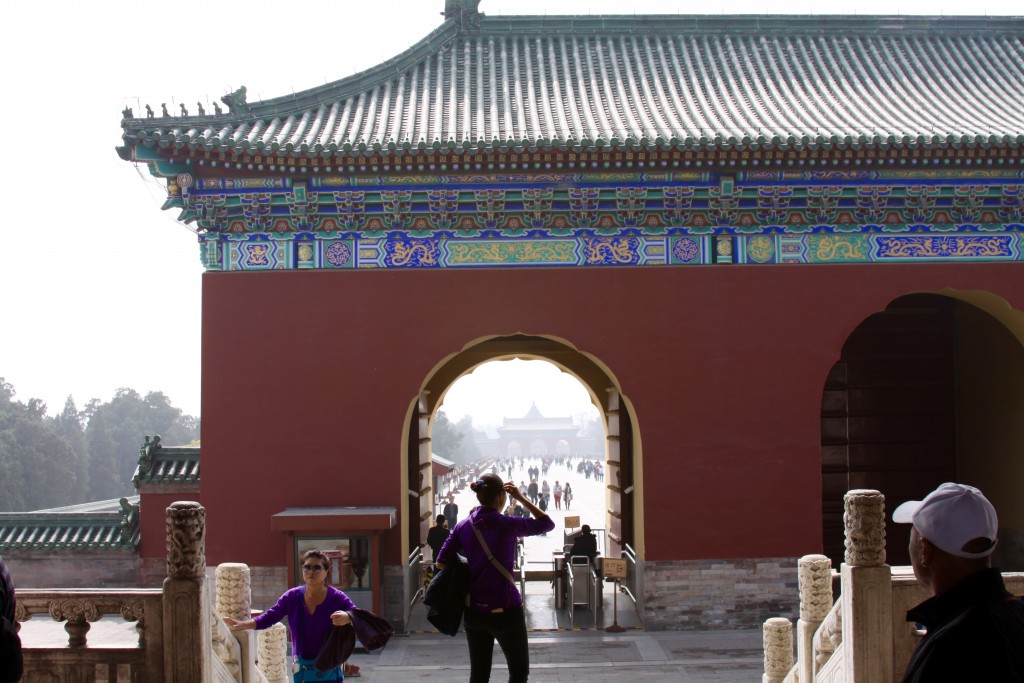 Temple of Heaven was beautiful and featured many people taking pictures of us with impressive telephoto lenses. This also happened later in the trip in Xi’an… Jon and I kept thinking we were in the way of something people were trying to photograph, so kept moving.. until teenage girls began giggling and it became clear we were the subjects. Bizarre experience, but people were generally nice. Inside the temple gardens there were many local people exercising, visiting, trading collectibles, talking, and spending time with family and friends.

Men showing off polished walnuts they had collected. Our guide translated as they told us what made one more valuable than the other. The jokes are too easy. Let’s just not, mmk? 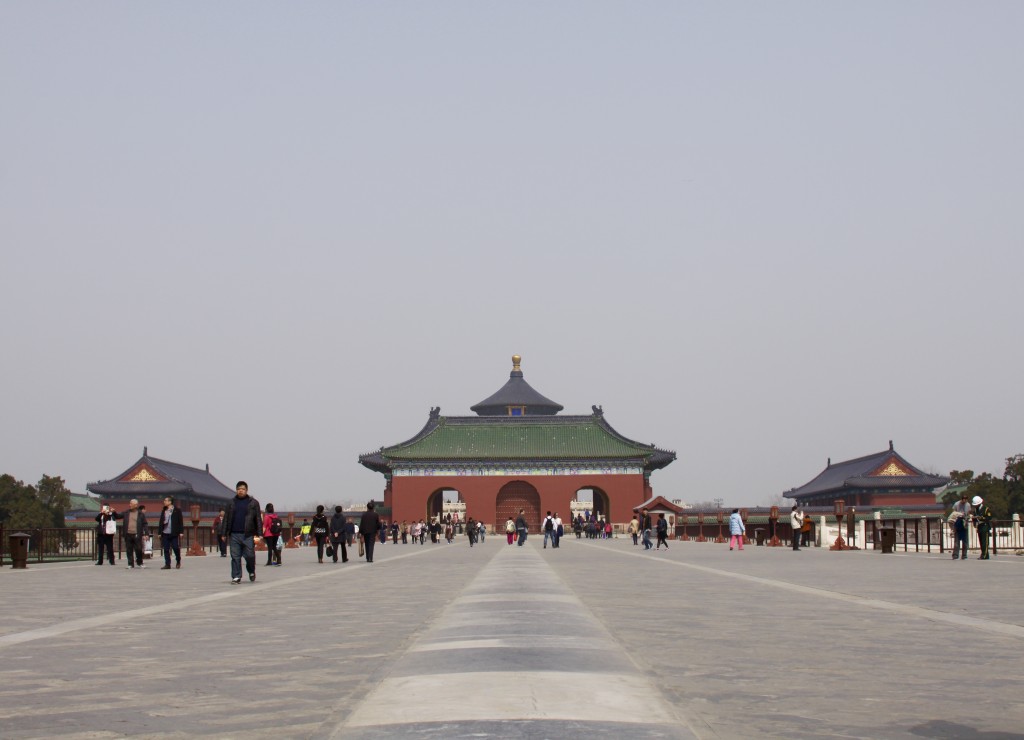 A Quick Note on Lunch

This soup was bomb, and if someone could tell me how to make it or where to get it in the states, that would be fabulous. There were bits of tofu (I think) in a broth similar to egg drop soup. The rest was good, too, but I dream about this soup.

I still feel like I need to read more about Tiananmen, and I say this every time it comes up. Every. Single Time. There are at least three notes in my phone reminding me to do this, but here we are. 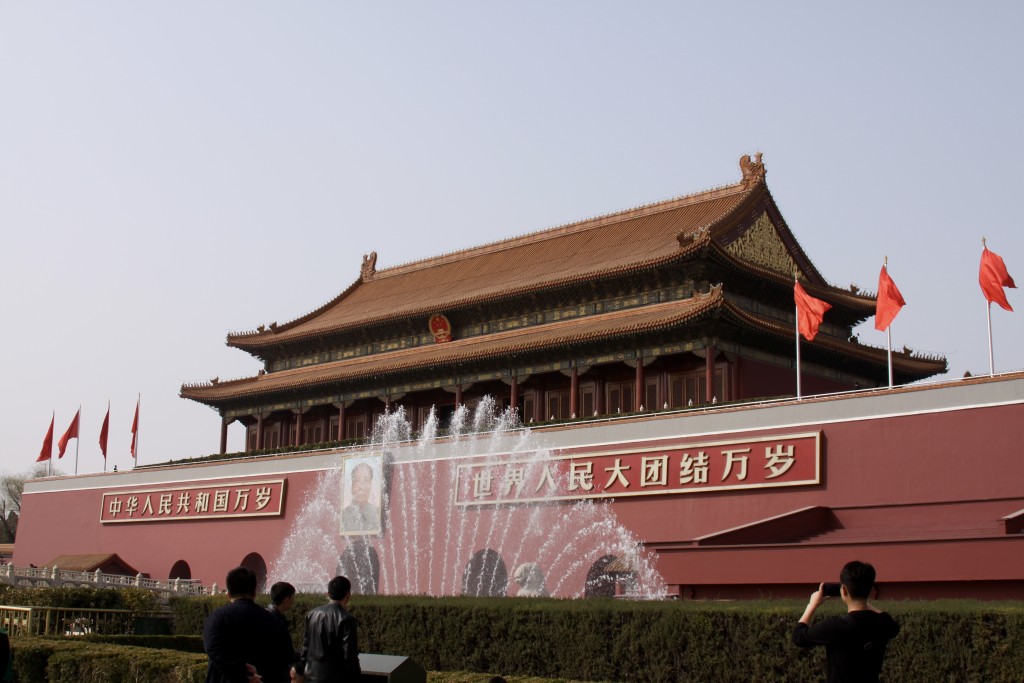 Large parts of the square were blocked off due to some meeting of diplomats occurring while we were in town. Apparently we also missed Mark Zuckerberg by a day. China informed him they’d be “missing” Facebook for, like, ever.

The Forbidden City and the Imperial Gardens

The Forbidden City was, in fact, forbidden to any non-royal-and-friends-of-royal people during what our guide would have called the “hay-day” of the Ming and Qing Dynasties. Basically, imagine no one other than your family, friends, concubines (duh), and other employees in your house, or your neighborhood, or your suburb, or potentially your city. Really interesting place, dark stories aplenty I’m sure, with beautiful architecture and views. 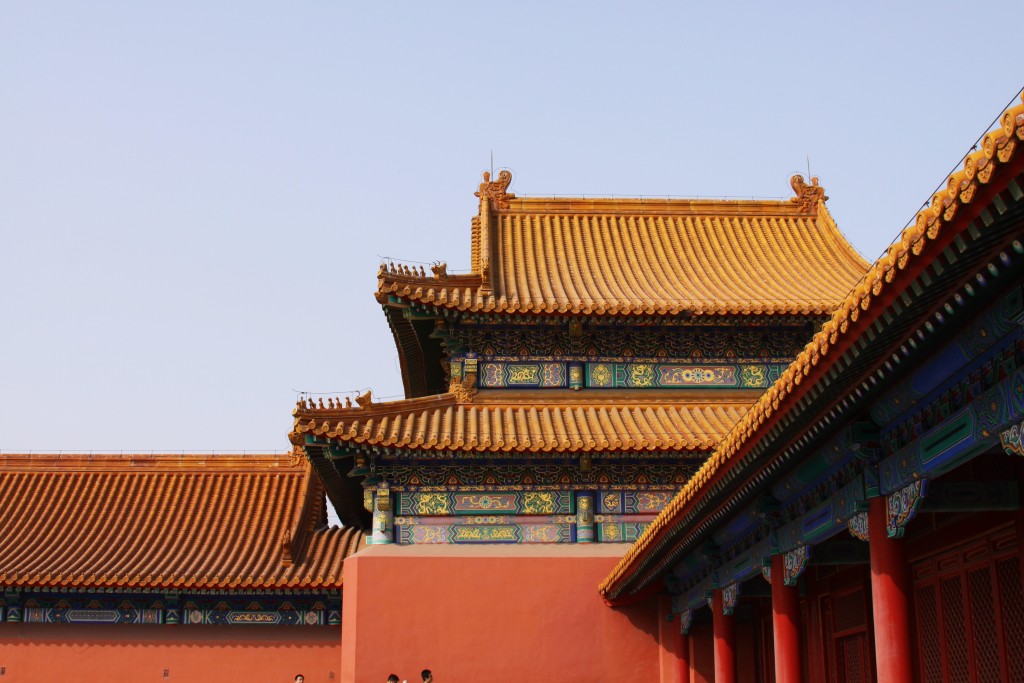 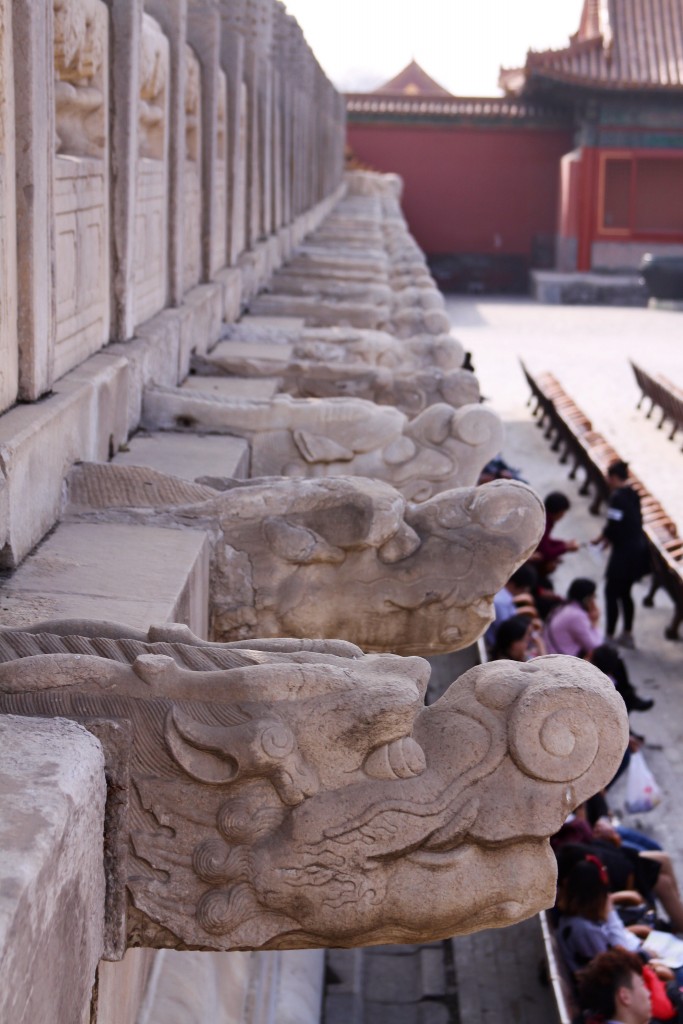 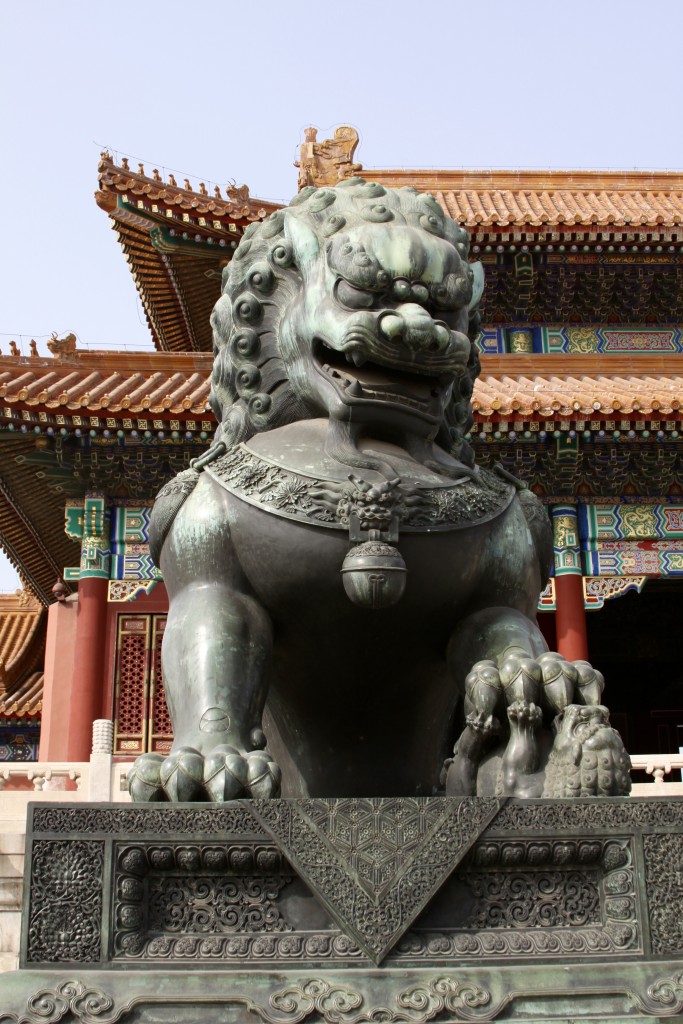 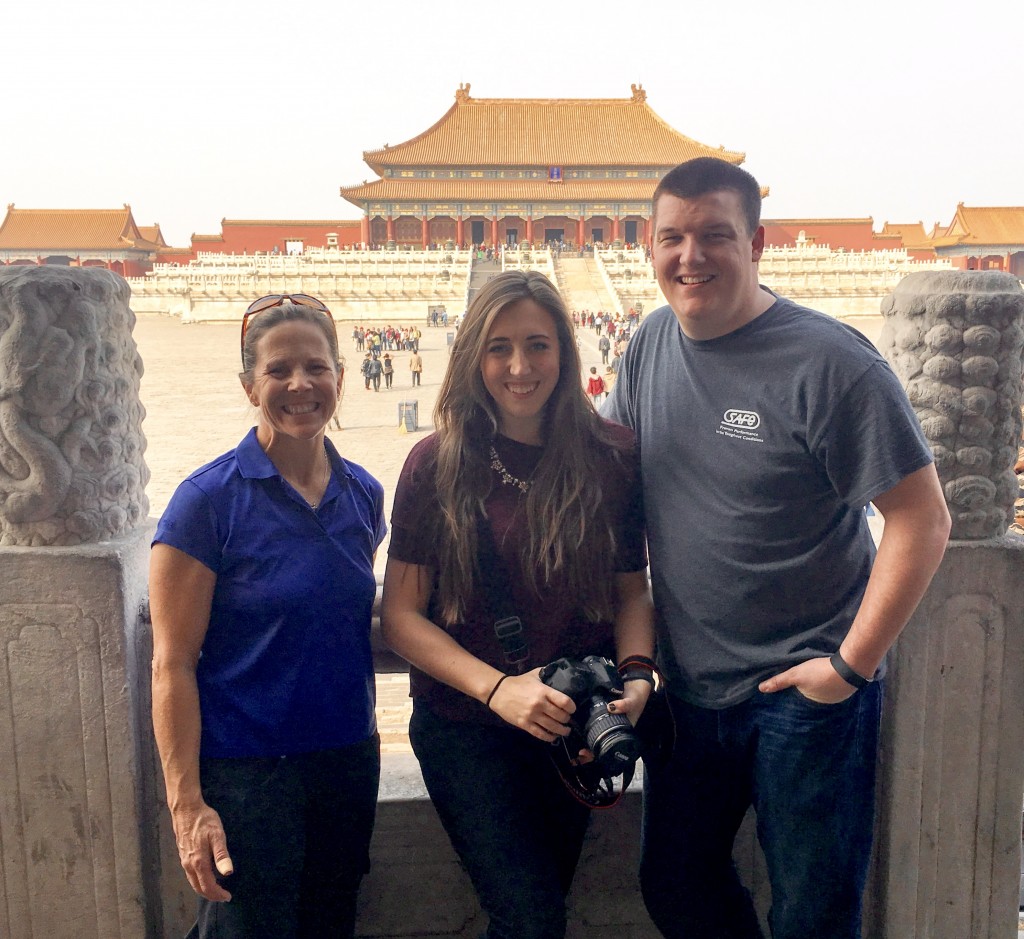 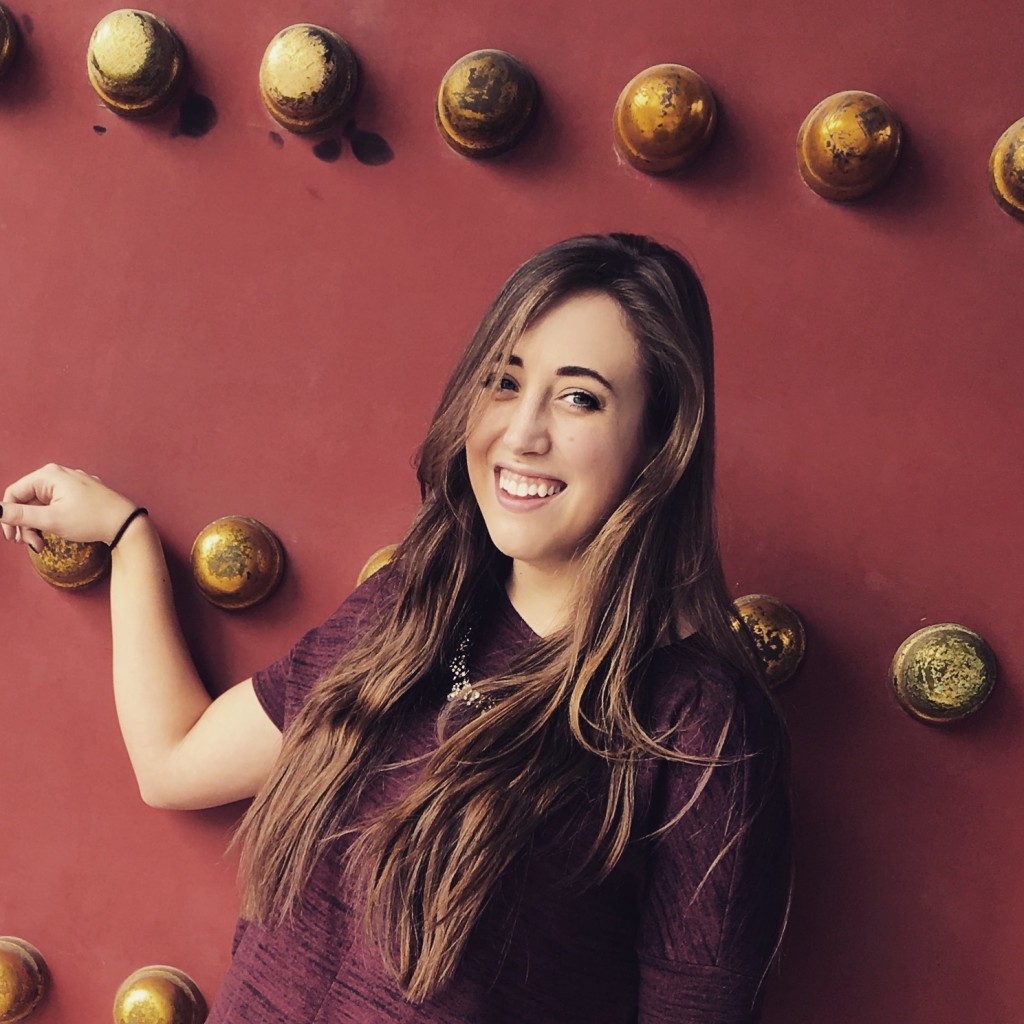 Our guide was completely obsessed with getting me to pose in front of these giant doors. It was comical. I was not doing a remotely satisfactory job for her, so we have about a million versions of my awkwardness in various poses she demonstrated for me… I’ll spare you the rest 😉

Should the royals tire of their city, they could stroll on into the gardens. So.. we did, too. 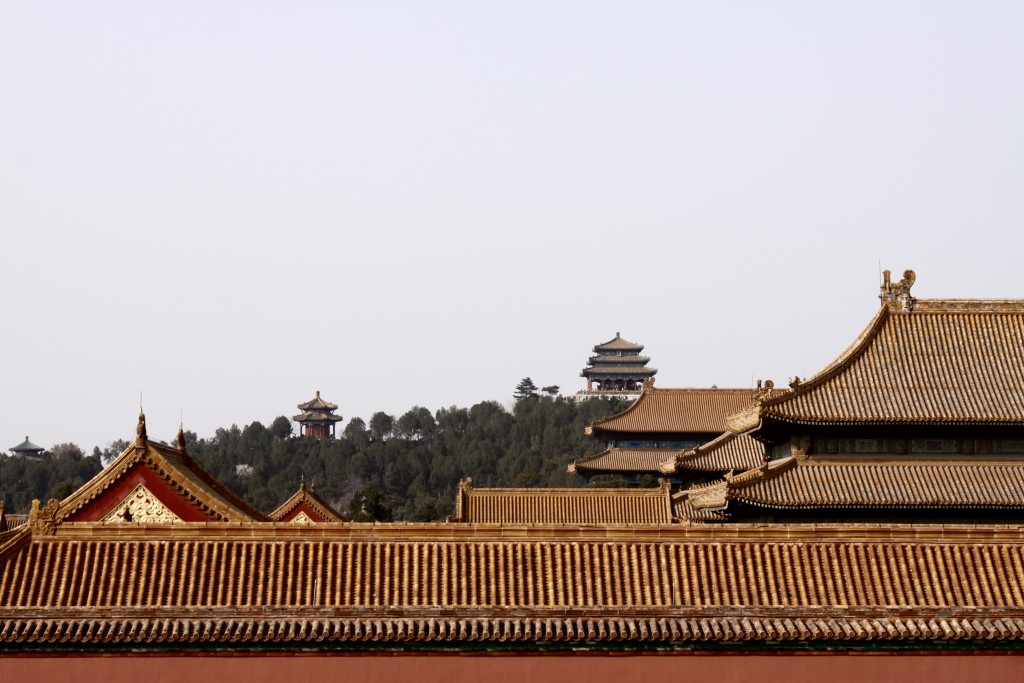 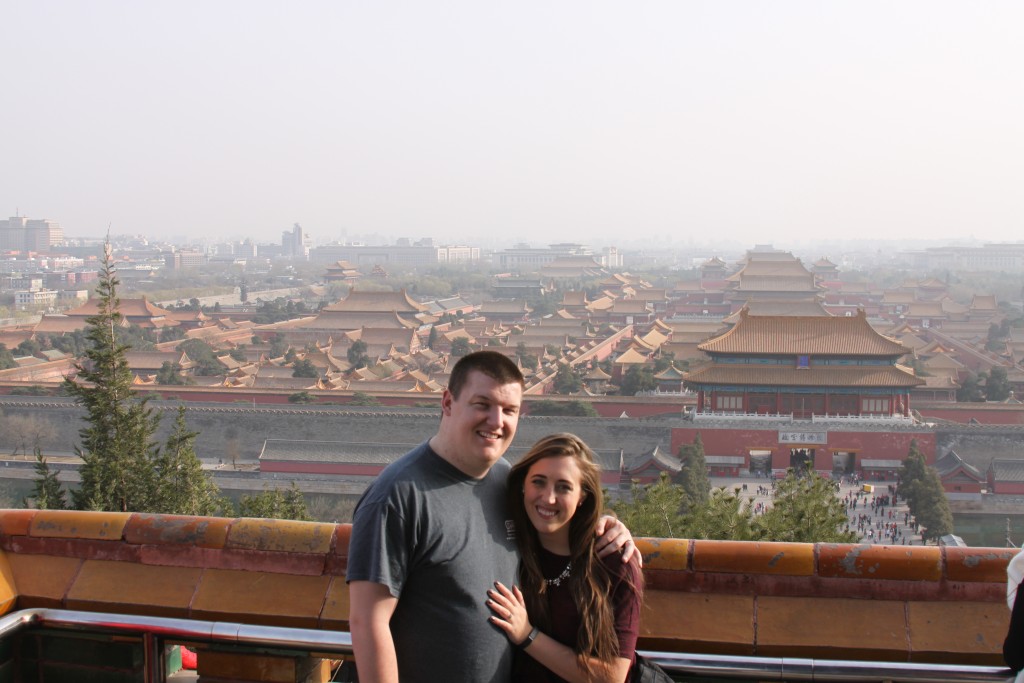 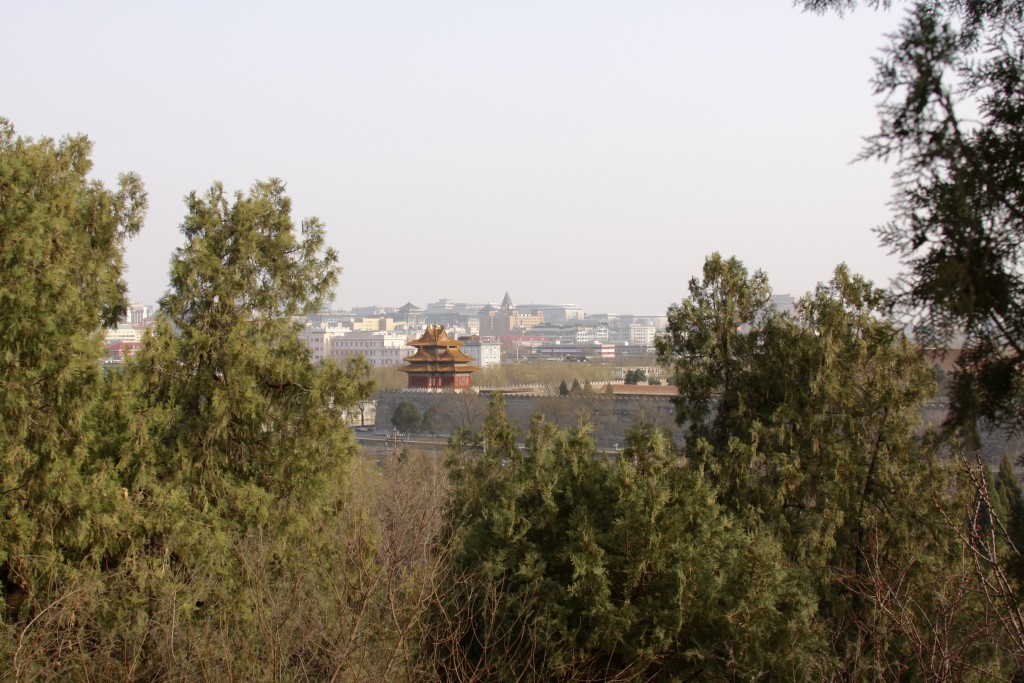 Dinner with the Family 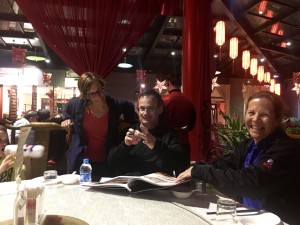 At the end of our day of tourist stops, we headed back to Kenny and Kerry’s house and went to dinner at the Chinese Restaurant (or I suppose, more appropriately.. just restaurant) near their home. I’ve never craved eggplant before, but after this crazy, caramelized treat of a vegetable, I do now. The dumplings were still the best, though! 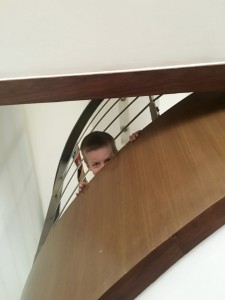 Our guide took us to the pearl market early in the trip, so we could get a feel for what it really was. We went back later in the trip with Uncle Kenny, which was a much more diverse and fun experience.

Here, you can see how enthralled Jon was with the actual pearl area of the pearl market… 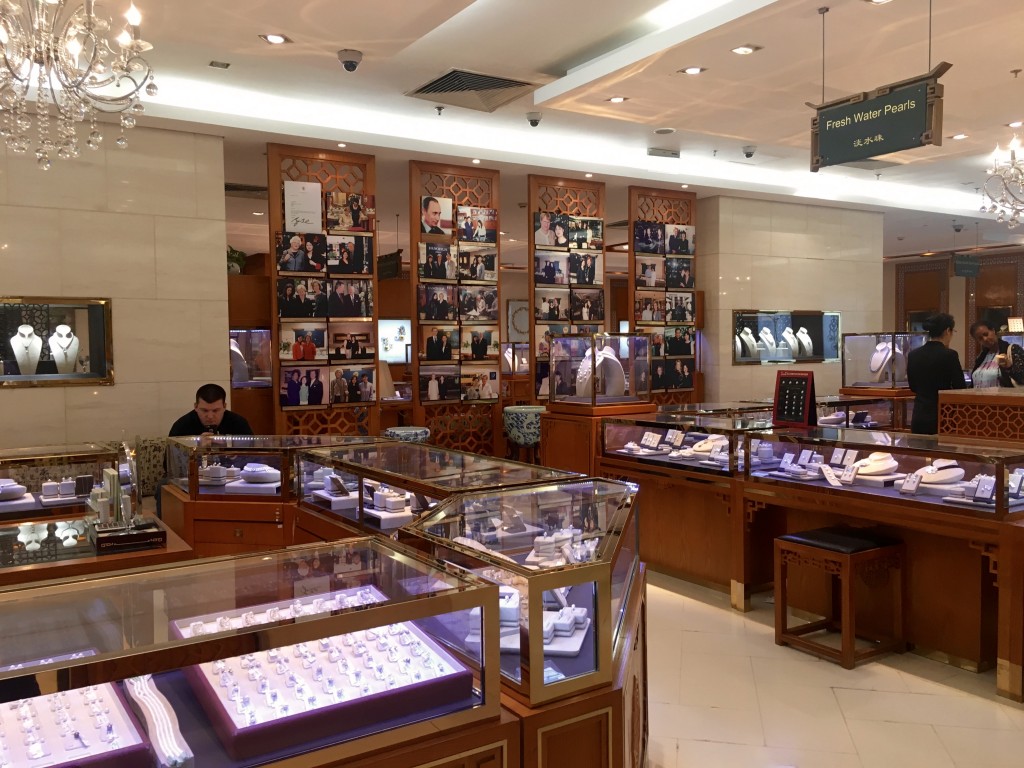 And with that, we’re off to Xi’an!